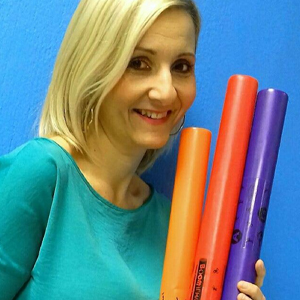 Effie Bachtsevana was born in Melbourne and at the age of ten moved with her family to Thessaloniki. When she was still very young she decided that she wanted to do something with music, and so began her thrilling exploration of the wonderful world of music. For the past 18 years she has worked continuously in public and private conservatories, day care centres, and as head of music and kinetics at various vocational training institutions.

She loves children, and is constantly seeking out new paths and creative inspirations, so as to pass her joy in music on to them. Boomwhackers are a landmark in her musical journey, for they are indisputably an inventive answer to the question “music or play?”

Having seen how enthusiastically children respond to boomwhackers, in 2012 she created a “Boomwhacker Οrchestra” for children aged 5-12 at the Neapolis-Sykies Municipal Conservatory, which already has a host of performances to its credit. She has also succeeded in introducing the boomwhackers method into the municipality’s day care centres. Boomwhackers were enthusiastically embraced by her pupils in elementary music classes, where for four years now this is the only method she uses. Since 2012 she has given seminars for pre-school and primary school teachers on the use of the system.

Students of all ages from her various classes have appeared with her on television programmes and in performances at the Thessaloniki Children’s Museum, the Teloglion Foundation, bookshops, libraries and art centres.

The experience she has accumulated over her career has taught her that a child can discover the secret of happiness only when he truly loves what he wants.